The Junior season came to a happy end at Hennerton Golf Club on Sunday 24 October.  We played out the year with an 11-hole Florida Scramble, inviting as many pre-handicap girls as wanted to take part, and each Junior being paired with an adult.  The dads with suspect handicaps were threatened with an instant reduction on the first if their tee shot looked too good … but all played ball.  And despite scrambles being the slowest form of golf known to man (or Junior), everyone was round in good time.

Bella, our Junior Captain presented prizes to the winners and runners-up

Winners: With Bella, Holly Lund with dad Nic and Sophia Fadden and her dad Andrew

What a pity it was that we didn’t have a prize for the smartest-dressed pairing.  Bella and her dad looked quite sophisticated in their pale purple (lavender?) tops (see Bella above) … but who could have missed Chloe and Mark Walkington?  Hi-viz orange would be the best description of their tops …  there is a picture of Chloe later on so you can check this out.

It was a great pleasure to welcome Mia Hynes to our gathering.  What a lot changes in a year.  Twelve months ago Mia was one of the Juniors; this year she is in her second year at uni and came along as Megan Hewinson’s ‘adult’.

The AGM is an opportunity to celebrate the golfing year just gone.

Successes of the year

Successes within the wider County 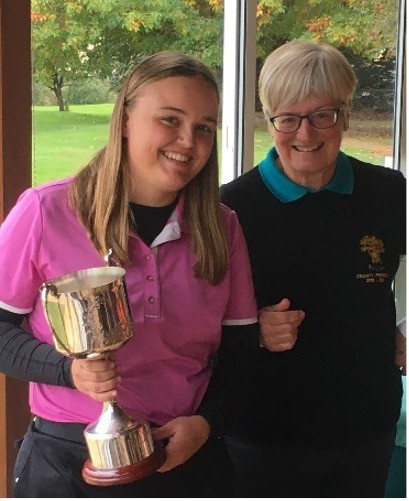 Successes beyond our borders

And back home again 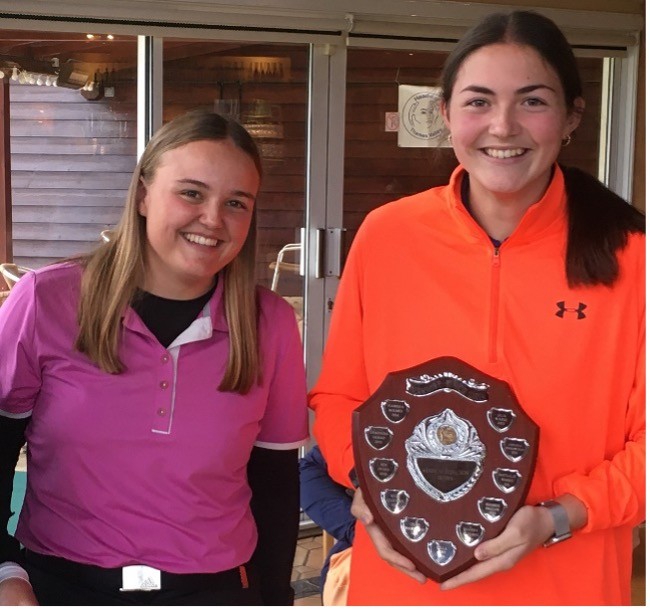 The AGM is the occasion where the FitzGerald Shield is presented to the player with the greatest handicap reduction.  This is calculated not as a straight reduction but as a proportion (as most of us believe it might be easier to reduce from 53 to 40 than from 23 to 10).

However, the winner this year is Chloe Walkington coming down from 11.9 to 5.1

Bella presents the trophy to Chloe

Junior Colours were presented to three players.  Chloe and Katy Lansley won their handicap colours: Chloe for winning the Handicap Trophy on Championship Day and Katy for gaining six points, winning all her games, in the handicap matches.  Bella gained her full colours for having won the Junior Championship.

The final task of the afternoon was to introduce the new Junior Captain to everyone … except, as the president explained, she wouldn’t be so new.  Because her year had been affected by Covid and she had not been able to do many of the things she would have liked, Bella had been asked if she would be prepared to do another year … and she was!  Bella told everyone she was delighted to do another year and hoped to introduce some additional competitions either after school or at weekends when she hoped everyone would have the opportunity to get to know each other better.

The Story of the day